SCANDAL AT MISSION CHURCH IN BOSTON 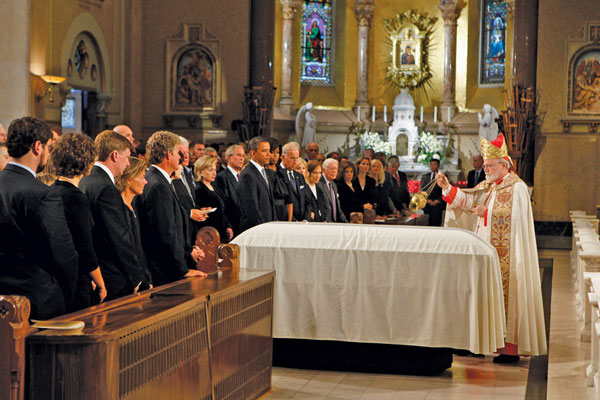 The Catholic Action League of Massachusetts today decried the scandal which occurred this morning at Boston’s most historic Catholic shrine — the Minor Basilica of Our Lady of Perpetual Help, known as Mission Church — where a Mass of Christian Burial was used to “celebrate the life” of one of America’s most notorious opponents of Catholic morality, the late Senator Edward M. Kennedy. Senator Kennedy fought for more than three decades to keep the killing of pre-born children legal and unrestricted in the United States.

Surgical abortion has claimed more than fifty-one million human lives since 1973. The Catholic religion defines abortion as an “abominable crime.”

President Barack Obama delivered the eulogy, in which he alluded to Kennedy’s support for gay rights. One of the Prayers of the Faithful was a petition to end divisions “between gays and straights”.

Ecclesial participants included Rev. Raymond Collins, Rector of the Basilica; Rev. Mark Hession, Kennedy’s parish priest from Our Lady of Victories Church in Centerville on Cape Cod; Rev. J. Donald Monan, Chancellor of Boston College; and Sean Cardinal O’Malley, Archbishop of Boston, who thanked President Obama for his words and his presence. Both the homilist, Fr. Hession, and Cardinal O’Malley suggested that the late senator had found eternal salvation.

The Catholic Action League called the event “a tragic example of the Church’s willingness to surrender to the culture, and serve Caesar rather than Christ.”

During his 1994 reelection campaign, Kennedy said, “I wear as a badge of honor my opposition to the anti-choicers.” His successful obstruction of the nomination of Judge Robert Bork to the U.S. Supreme Court in 1987 effectively prevented the overturning of Roe v. Wade. Beyond his specific positions on human life issues, Senator Kennedy, along with the late Congressman Robert Drinan, provided the cover and the example for two generations of Catholic politicians to defect from Church teaching on the sanctity of innocent human life.

“No rational person can reasonably be expected to take seriously Catholic opposition to abortion when a champion of the Culture of Death, who repeatedly betrayed the Faith of his baptism, is lauded and extolled by priests and prelates in a Marian basilica. This morning's spectacle is evidence of the corruption which pervades the Catholic Church in the United States. The right to life will never be recognized by secular society if it is not first vindicated and consistently upheld within the institutions of the Church itself.”